Who doesn’t need a little magic or otherworldliness in their life? I know I do – and that’s why I love enchanting mysteries with fanciful elements of magic or the paranormal. Over the years, I’ve amassed a list of my favorite cozy mysteries with supernatural elements. The list includes witches who make magic in the kitchen, a series with fairy themes (!!!),  one sexy Irish, whisky-loving ghost (yep, that’s right) and some flower power!

Cozy mysteries set in a world where magic is common placed are challenged to be believable. Suspension of disbelief is to be expected, but it takes an especially gifted writer to create a believable story in which the paranormal exists, there’s a mystery to be solved and probably a complicated romance as well. But I’ve found six authors who are on my just-pre-order-whatever-they publish-list. And I hope you’ll discover a few new authors as well! 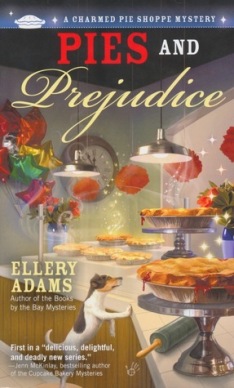 Ellery Adams, a prolific and bestselling author has so many good cozy mysteries to choose from, but this, one of her older series is one of my favorite magical ones. It features witchery and pies – such a magically delicous combination! This series was also my first introduction to paranormal cozy mysteries.  You guys, I came for the baked good – but stayed for the witchy vibes.

I was really surprised by how much I enjoyed this story. It has the small town southern setting, interesting characters and a bakery.  Fortunately, this entire series had been written, so I was able to binge-read my way through the charmed pie shoppe world.

Pies And Prejudice: When the going gets tough, Ella Mae LaFaye bakes pies. So when she catches her husband cheating in New York, she heads back home to Havenwood, Georgia, where she can drown her sorrows in fresh fruit filling and flakey crust. But her pies aren’t just delicious. They’re having magical effects on the people who eat them–and the public is hungry for more.

Discovering her hidden talent for enchantment, Ella Mae makes her own wish come true by opening the Charmed Pie Shoppe. But with her old nemesis Loralyn Gaynor making trouble, and her old crush Hugh Dylan making nice, she has more than pie on her plate. and when Loralyn’s fiancé is found dead–killed with Ella Mae’s rolling pin–it’ll take all her sweet magic to clear her name. 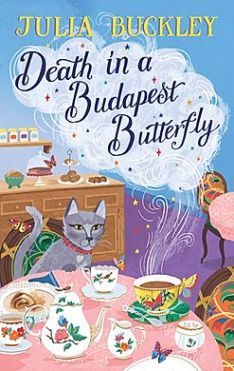 I was attracted to this cozy mystery because it featured Hungarian culture. Something new and different in the cozy world – I’m all for it. I knew teahouses were a theme in this story but I didn’t expect paranormal elements. With an eccentric grandmother who reads tea leaves and a main character with an especially strong intuition, this cozy fits nicely in the enchanted cozy mystery sub-genre. The paranormal elements are very light, and its clear tea is the name of the game in this story, but it’s there. And it’s interesting. Making it a favorite new series for me to enjoy.

Death In A Budapest Butterfly: Hana Keller and her family run Maggie’s Tea House, an establishment heavily influenced by the family’s Hungarian heritage and specializing in a European-style traditional tea service. But one of the shop’s largest draws is Hana’s eccentric grandmother, Juliana, renowned for her ability to read the future in the leaves at the bottom of customers’ cups. Lately, however, her readings have become alarmingly ominous and seemingly related to old Hungarian legends…

When a guest is poisoned at a tea event, Juliana’s dire predictions appear to have come true. Things are brought to a boil when Hana’s beloved  Anna Weatherley butterfly teacup becomes the center of the murder investigation as it carried the poisoned tea. The cup is claimed as evidence by a handsome police detective, and the pretty Tea House is suddenly endangered.  Hana and her family must catch the killer to save their business and bring the beautiful Budapest Butterfly back home where it belongs. 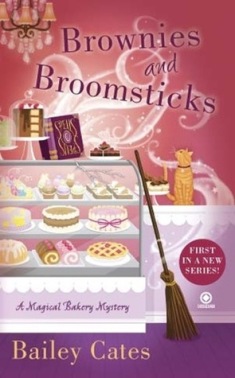 After I read Ellery Adam’s Charmed Pie Shoppe series, I was on the prowl specificlaly for a witches-in-the-kitchen cozy. And boy did I find it. Another cozy mystery set in the south, this series features all the baked goods, southern atmosphere and all the witchery you can shake a wand at…

Brownies and Broomsticks:  Katie Lightfoot’s tired of loafing around as the assistant manager of an Ohio bakery. So when her aunt Lucy and uncle Ben open a bakery in Savannah’s quaint downtown district and ask Katie to join them, she enthusiastically agrees.

While working at the Honeybee Bakery – named after Lucy’s cat – Katie notices that her aunt is adding mysterious herbs to her recipes. Turns out these herbal enhancements aren’t just tasty – Aunt Lucy is a witch and her recipes are actually spells!

When a curmudgeonly customer is murdered outside the Honeybee Bakery, Uncle Ben becomes the prime suspect. With the help of handsome journalist Steve Dawes, charming firefighter Declan McCarthy, and a few spells, Katie and Aunt Lucy stir up some toil and trouble to clear Ben’s name and find the real killer…

I love the idea of enchanted gardens with magical flowers. Bailey Cattrell’s new series delivers with an engaging protagonist who comes from a long line of women with special skills and knowledge of flowers and herbs. She just has this unspoken knowing that guides her through life. I like this kind of story, it has an underlying sense of whimsy, a quiet kind of magic that pervades the plot. The Enchanted Garden Mystery series is all of that, making it one of my very favorite reads!

Daisies For Innocence: The Enchanted Garden behind Elliana Allbright’s perfume shop draws people of all ages with its fragrant flowers and lush greenery. But when the magical serenity is interrupted, it’s up to Ellie to sniff out a killer.

Ellie’s life has blossomed in Poppyville, California since she opened Scents & Nonsense, a custom-made-perfume store. Her skills with aromas and botanical essences—some from her very own garden—seem almost…supernatural. Her perfumes can evoke emotions,  bring about change, or simply make people happy. Customers are flocking to the store to buy her wares or just to sit in her beautiful garden, sip tea and enjoy homemade cookies.

But she smells trouble when she learns that her part-time assistant Josie is dating her ex. And before she can tell the young woman to beware of his charms, she finds Josie dead in the Enchanted Garden. Now the prime suspect in Josie’s murder, Ellie must search for the real culprit in Josie’s past—because it’ll take a miracle to nip this problem in the bud…

Alexia Gordon’s paranormal cozy wins with me on several different fronts. One it’s in Ireland, two it features a lot of whisky, three there’s an intelligent, attractive, fiesty, musically talented woman of color as protagonist. She’s also from the south, ya’ll. 🙂 And there’s a sexy ghost.

I’ve never been a fan of stories with ghosts, but this one has so much other stuff that I love, that I love this ghost in a mystery too. And the Irish spirits – the kind you drink, not the kind that haunts hooked me too. I”m not just a fan of culinary cozies, I love beverage-themed cozies too… This book got me into drinking whisky, ya’ll. Something I never thought I’d do! But I did, and now I’m a fan.

Alexia does a brilliant job of creating a world in which I totally believe that ghosts are a thing and they can help solve mysteries. 🙂

Murder In G Major: With few other options, African-American classical musician Gethsemane Brown accepts a less-than-ideal position turning a group of rowdy schoolboys into an award-winning orchestra. Stranded without luggage or money in the Irish countryside, she figures any job is better than none.

The catch? The ghost of the cottage’s murdered owner haunts the place.

Falsely accused of killing his wife (and himself), he begs Gethsemane to clear his name so he can rest in peace.

Gethsemane’s reluctant investigation provokes a dormant killer and she soon finds herself in grave danger. As Gethsemane races to prevent a deadly encore, will she uncover the truth or star in her own farewell performance? 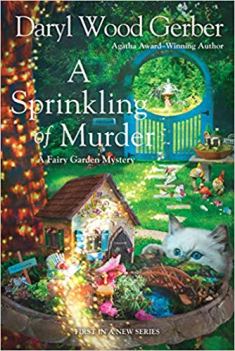 You guys, I swear, I have been wishing for a fairy-themed cozy mystery for the last longest. I think I manifested this! Or maybe Daryl Wood Gerber just had a really cool idea for a cozy mystery series. Whatever the case, I’m so glad she’s writing this series. I thought I might have to write the book I want to read – and that’s one with fairies ya’ll.

This mystery publishes in June 2020, so I haven’t even had a chance to read it (like all of the other books on this list). But I don’t even care, because I know it’s going to be good! Gerber is the author of one of my other favorite culinary series, A French Bistro Mystery series and I love her writing and character development and plotting, so… Already pre-ordered.

A Sprinkling Of  Murder: Since childhood, Courtney has loved fairies. After her mother died when Courtney was ten, she lost touch with that feeling of magic. A year ago, at age twenty-nine, she rediscovered it when she left her father’s landscaping business to spread her wings and start a fairy garden business and teashop in beautiful Carmel, California. At Open Your Imagination, she teaches garden design and sells everything from fairy figurines to tinkling wind chimes. Now she’s starting a book club tea.

But the light of the magical world she’s created inside her shop is darkened one night when she discovers neighboring dog-grooming business owner Mick Watkins dead beside her patio fountain. To make matters worse, the police suspect Courtney of the crime. To clear her name and find the real killer, Courtney will have to wing it. But she’s about to get a little help from an unexpected source . . .

The last book on this list, is of course, by moi. An Enchanted Bay Mystery series has all the magical stuff I love. Good witches vs. bad. Herbal magic. I just saw The Last Airbender with my sons (the movie), now we’re watching the cartoon together, so I’m gonna say there’s water bending in this book too. I didn’t know that was a thing before this past weekend, but it is and that’s what the Sobieski clan is doing.

And there’s mermaid mythology and enchanted beauty products and tea. So… perfect for this list!

A Spell For Trouble: Aleksandra Daniels hasn’t set foot in the quiet seaside town of Bellamy Bay, North Carolina in over twenty years. Ever since her mother’s tragic death, her father has mysteriously forbidden her from visiting her aunt and cousins. But on a whim, Alex accepts an invitation to visit her estranged relatives and to help them in their family business: an herbal apothecary known for its remarkably potent teas, salves, and folk remedies.

Bellamy Bay doesn’t look like trouble, but this is a town that harbors dark secrets. Alex discovers that her own family is at the center of salacious town gossip and that they are rumored to be magical healers descended from mermaids. She brushes this off as nonsense until a local is poisoned and her aunt Lidia is arrested for the crime. Alex is certain Lidia is being framed, and she resolves to find out why.

Alex’s investigation unearths stories that some have gone to desperate lengths to conceal: forbidden affairs, family rivalries, and the truth about Alex’s own ancestry. And when the case turns deadly, Alex learns that not only are these secrets worth hiding, but they may even be worth killing for.

This is of course not an exhaustive list of the best cozies that share and explore magical themes, just a few of my personal favorites. But I’d love to hear which ones you love and why. Let’s discuss in the comments!